You are here: RAID > Blogs > Please, can I use something else to eat my lasagne?

Please, can I use something else to eat my lasagne?

Wes Ward is currently a part-time Media Officer with Charles Sturt University (CSU), who has worked with multicultural teams in developing countries in SE Asia and the Pacific, and in Australia. During these times, he worked for the Australian Centre for International Agricultural Research (ACIAR), the University of the South Pacific, the South Pacific Regional Environment Programme, and most recently CSU. He graduated with a PhD in December 2016, and since then has been communicating the findings of his study.

In my last article for RAID, titled Lasagne, chopsticks, and communication in international teams, I introduced the art of eating lasagne with chopsticks. 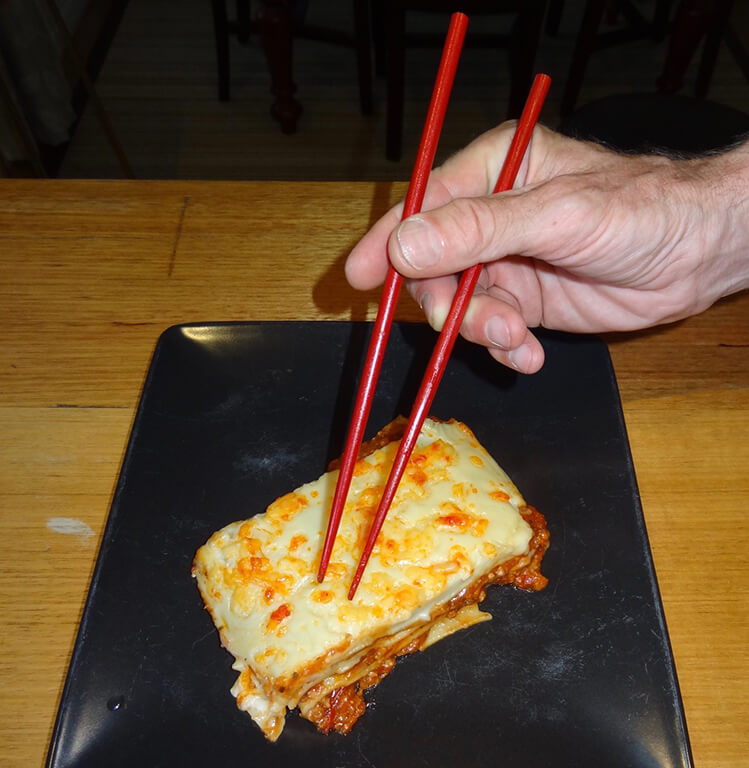 Chopsticks are not the ideal way to eat lasagne!

I likened this to what some scientists from developing countries feel when using particular information and computer technologies (ICTs) recommended (or sometimes enforced) by their overseas counterparts for communication within their research teams. Furthermore, these ICTs can be an expensive failure as they don’t meet the needs of the project and the team.

But what if you really wanted to make this collaboration work? What if you want to try other ways of ‘eating that lasagne’ to establish more effective communication between your team members?

Addressing this dilemma as part of my PhD, I developed a tool – I-CHET, or the Intercultural Combined Heuristic Evaluation Tool – to assess whether an ICT met the needs of local scientists and their international counterparts collaborating in research teams and living in different countries and time zones.

Most important for Lao scientists (and expatriates working in Lao PDR) was the use of technical English as the common language in the team, and for the Australians it was developing mutual trust and respect, with little recognition of the language barrier by some more inexperienced Australian researchers. Other barriers included accounting for cultural differences, needing to work in teams divided by distance, and overcoming economic and political differences.

I incorporated these barriers into I-CHET, and used a prototype of the tool to assess nine ICTs used in 2011/12 by international agricultural research teams comprising Lao and Australian scientists. These were the email program Outlook; Skype; two relevant agricultural websites, ACIAR and the Lao National Agricultural and Forestry Research Institute (NAFRI); the audio and SMS features in mobile phones; LaoFab, a listserv for group discussions on agricultural business in Lao PDR; Facebook; and Adobe Connect for online conferencing.

In my previous blog, I highlighted the predominant and preferred use of email, particularly as it allowed non-native English speakers to better understand and ‘craft’ their messages; and problems with Skype, due to its inherent difficulties for non-native English speakers and its requirement for higher bandwidth, which was not available to Lao scientists at that time.

But what about the other ICTs, particularly social media and mobile phones?

Mobile phones have become common across South-East Asia and in developing countries in general. One major positive for developing nations is that mobiles circumvent the need to lay expensive physical telecommunication infrastructure across nations where none previously existed. When you peer across the Mekong, along the length of the Lao-Thai border and you see the microwave towers facing the Lao hinterland, you observe how Thai businesses are taking advantage of the Lao thirst to connect. But can our multicultural research teams use this ubiquitous technology?

Interestingly, as highlighted in the I-CHET analysis, the answer is ‘yes and no’. While the audio feature of mobiles encouraged interpersonal communication through the greater availability of some non-verbal language cues such as voice intonation, speed of delivery and use of ‘silence’, there was poor support for inexperienced users or non-native English speakers. As with Skype, the immediacy of messages transmitted by voice could also provide difficulties for non-native English speakers who could not translate messages from English into Lao fast enough for simultaneous conversation, especially if they wished to maintain ‘face’ with an English speaker.

Of greater interest, however, was a common problem noted by Lao users who complained that using mobiles with their counterparts was too expensive: visiting Australian scientists often used international roaming on their mobiles instead of local SIM cards and so messaging and calling at international rates. This made mobile communication far too expensive for Lao counterparts, even in their own country!

At the time of assessment in 2013, the possibilities of social media for team communication were being explored, particularly by some Australian scientists. Facebook features were ranked very favourably using I-CHET, particularly for its support for interpersonal communication and for working in groups. However, Facebook was not used or considered by Lao scientists for professional communication, while many used Facebook to communicate with family members living overseas.

This highlights the importance of assessing the use of various ICTs in the contexts of various users. For example, the I-CHET assessments in my study were carried out in regional Australia, which will be different to assessments carried out on similar ICTs used in, say, the Lao capital Vientiane or provincial Laos. This is particularly due to differences in online infrastructure and institutional access and needs of various team members, who are the focus of the assessment. In addition, legal access may be curtailed, such as the blocking of Facebook in China but official acceptance of ‘local’ social media such as Weibo and WeChat.

So, what for the future use of ICTs by international research teams? I believe each ICT tool can have a place in a team’s communication toolbox, from the direct document dissemination of email, to the support for group ‘conversations’ offered by Facebook, and the cheaper alternative to face-to-face communication offered via online conferencing. In addition, developments since 2013, such as improved support for major languages other than English in Facebook, would go some way to overcoming the communication barriers I outlined.

However, I believe the use of these tools must be assessed, discussed and tested by and in the individual contexts of team members, and protocols regarding their usage negotiated and agreed by all team members before research projects start. This would avoid or minimise the initial frustrations, barriers and misunderstandings that can occur in communication between team members from various nations, cultures, levels of economic development and time zones.

Any problems arising in using communication ICTs should also be included in regular projects meetings to ensure the tools used continue to be the most appropriate for the needs of these teams. This also opens the door testing new or more appropriate tools for use by and in the context of teams.

Who knows, we could also find a new way to eat lasagne?!

BTW, for details on this study, my thesis is titled “Exploring in-person & technologically-mediated communication within international agricultural research teams”, and available at http://trove.nla.gov.au/version/235880785.

I have also described how I developed I-CHET in an academic paper presented to the 2017 conference of the international Association for Information Science and Technology, held last October in Washington DC.