You are here: RAID > Blogs > Bananas in the Philippines

Bananas in the Philippines

As a graduate officer at ACIAR, I have been involved in developing a project from scoping study to project inception on the destructive disease Fusarium Wilt (FW) in bananas in the Philippines. Originally from a broad acre cereal cropping property in South Australia where the most I knew about bananas was that I enjoyed them on my breakfast, there was a lot to learn about banana agronomy. In the last 6 months I have learnt about the banana industry in both Australia and the Philippines, and also learnt firsthand what ACIAR’s role is in fostering projects which are so significant to the livelihoods of farmers.

After coconut oil, bananas are the largest export from the Philippines, and are worth US$700 M gross export. FW is devastating smallholder banana farms in the Philippines because of the occurrence of a virulent race, tropical race four (TR4), which overcomes resistance mechanisms that Cavendish bananas demonstrate to other fusarium races. In Mindanao, 82,050 ha are planted to the variety Cavendish, similarly 90% of Australian bananas grown are also of the Cavendish variety, a variety that is highly susceptible to TR4. Australian and Filippino banana growers have a common problem, which is the threat of TR4 to their Cavendish bananas and their livelihoods. The difference is that the Philippines have already got FW TR4, and Australia doesn’t. Therefore this project provides the opportunity for Filipino and Australian researchers and growers to band together to identify how FW can be managed. This not only benefits the local Filipino growers in determining what can be done now that the disease has arrived, but also to the Australian industry who can prepare for a future incursion of FW TR4 and how to manage and mitigate its spread.

After just one field trip in the Davao region in the Philippines it became evident that the TR4 situation is very severe with rapid spread. Although there were many research needs identified, the research priorities developed to shape an ACIAR project in the Philippines were in researching methods on the control of spread of the disease, how to manage the disease once a plantation is infected and the need for this information to be extended to small holder farmers.

If someone had told me I would be working with bananas in the tropics when I was studying my BA Agriculture Science in Adelaide I would have told them no way, however I have found that being exposed to crops outside of cereals is exciting and that they have more common with one another than I would have guessed. This is just one example of the great opportunities available in the agricultural sector. 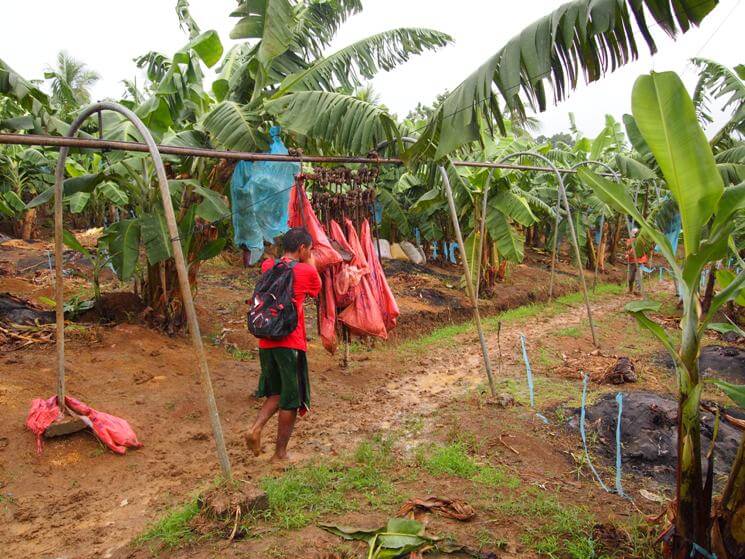 A photo from Bonnie’s experience in the Philippines