You are here: RAID > Blogs > The light at the end of the field: guiding humans to become biological controls

The light at the end of the field: guiding humans to become biological controls

I’ve just come back from my first field season in Cambodia for my PhD fieldwork. My PhD is aimed at networking a way to sustainable integrated pest management (IPM) for rice in Northwest Cambodia. This will be achieved by developing an integrated understanding of the insect pest, predator and farm management networks that influence Cambodian rice production.

So, I arrived in Siem Reap with my mind focused on the smaller things in life (insects), and I set out to explore what Cambodian rice fields had to offer. Driving from Siem Reap to Battambang is a sea of green; rural agricultural, rice orientated landscapes with minimal development. Continuously emerging among the scenic greenery, makeshift looking white plastic structures with a bucket of soapy water and a light questionably (well to any other person than a Cambodian) attached above (as pictured below. Figure 1). 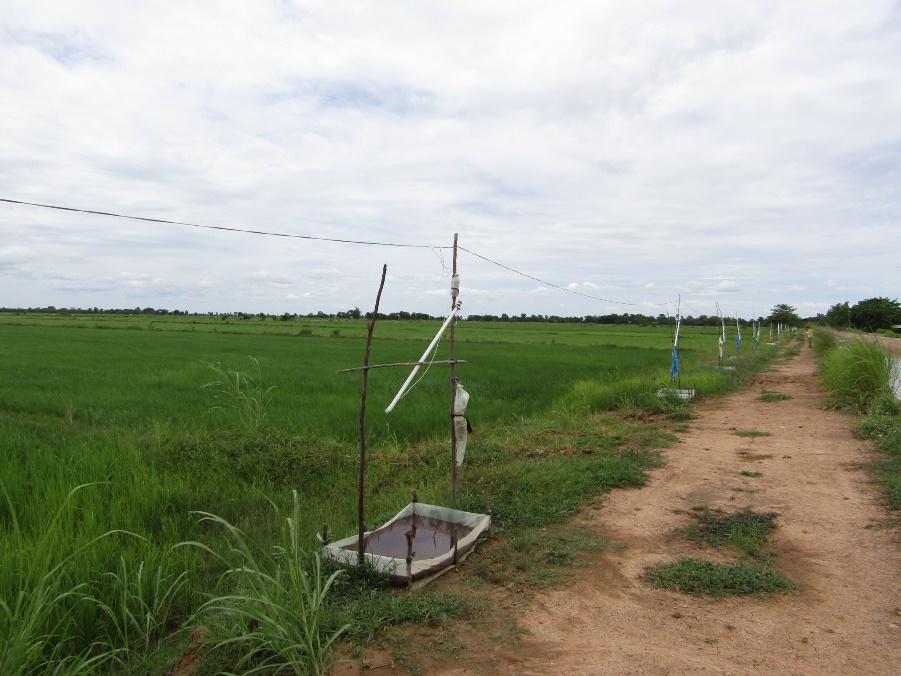 So many of these littered the landscape, they were everywhere. However, from afar I could not tell what they were. Though, when I got closer, I realised they were insect light traps.

Now, it is not that insects light traps are big news, but going into Cambodia with the goal of investigating pest incidence, abundance and farmers views of pests and pest management, having these makeshift light traps everywhere within the agricultural landscapes was a really cool, interesting and thought-provoking thing to see. Particularly as chemical control is reported as the most common, if not the only form of pest control in Cambodia.

So as we visited a few villages and farms around Battambang Provence, I started asking questions to the Cambodian farmers (with thanks to the University of Battambang students for the translation).

Many farmers think insects are one of the main, if not the main cause of yield loss in their rice. So along with chemical control, they set up these light trap structures. The buckets below are filled with water and detergent to kill/ disable the insects that fall in (which I saw a few bottles of these lying around the fields).

Each night the lights come on and the insects fly in, in their various forms; crickets, grasshoppers, moths, flies, beetles and bugs, many of which are considered pests (Figure 2). The aim is to attract the insects out of the field and off the crop, and from what I saw they do just that. But I found out that these traps play a much larger role in the social and ecological ecosystem. 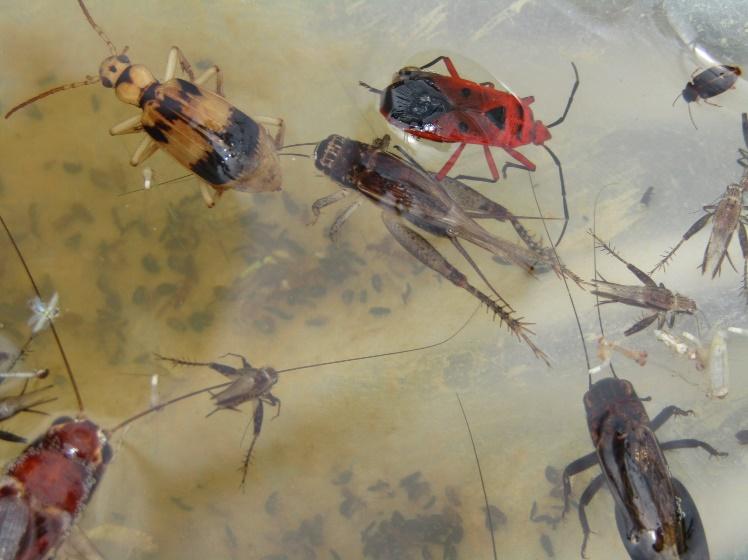 Bring in humans as biological controls. These light traps not only provide a form of alternative pest control but provide an additional source of food and income for these Cambodian farmers. Most of the insects caught (crickets, grasshoppers and beetles) are either eaten by the farmer and their families or sold in the market (Figure 3 and Figure 4).  This struck me as an awesome and innovative example of how humans can play such an important role in agro-ecological systems.

Many farmers keep the crickets and eat them, mainly due to their nutritional benefits. However, if they’re sold, crickets such as mole crickets (which are a major rice pest!) can collect up to $4 USD a kilogram in the markets (Figure 3 and Figure 4).

Figure 3: Mole crickets caught by one of my light traps. These crickets can collect up to $4 USD a kilogram. 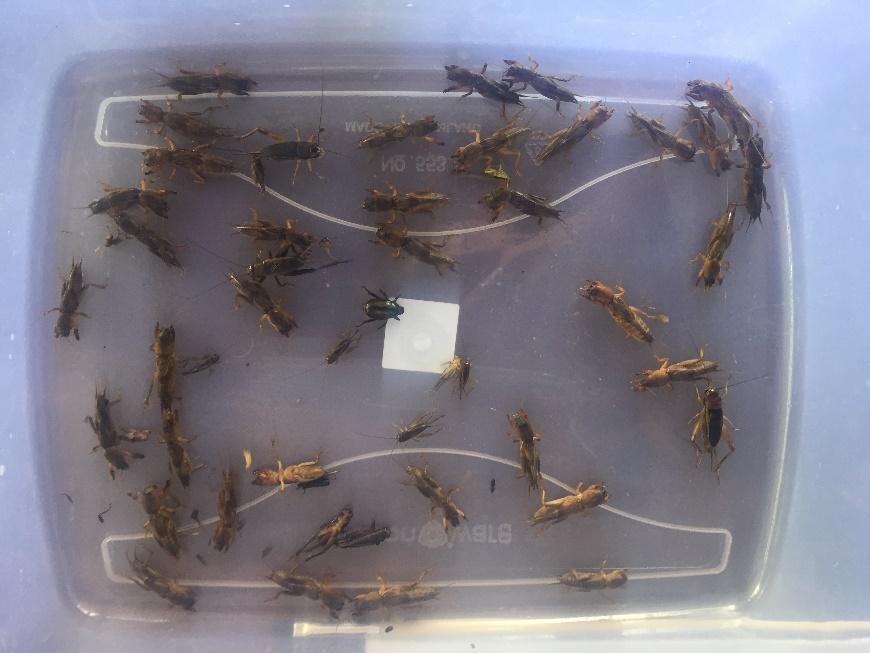 Figure 3: Mole crickets caught by one of my light traps. These crickets can collect up to $4 USD a kilogram. 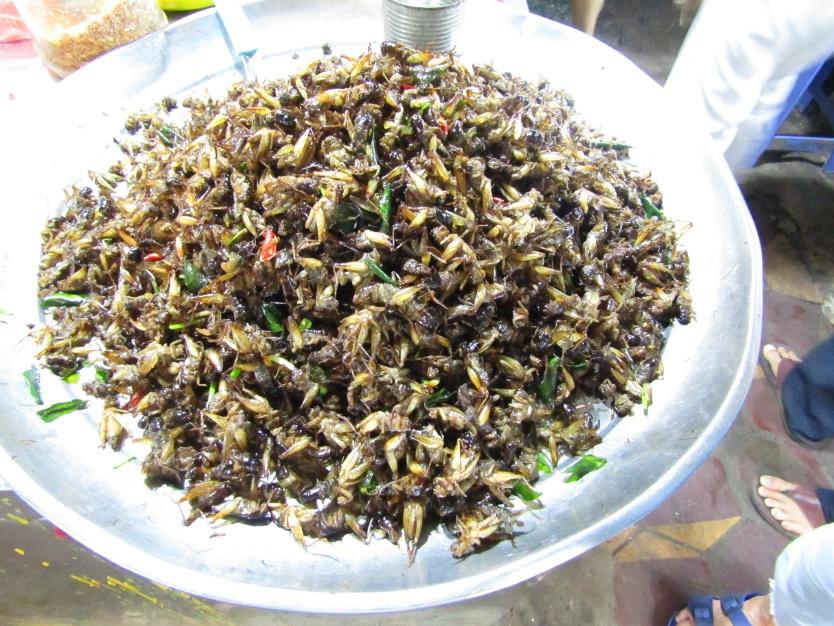 Figure 4: Bowl of crickets fried with herbs and spices in a market in Siem Reap. One scoop equalled approximately $1 USD.

In learning this, I really wanted to understand how much impact humans as biological control agents could have. So I had to determine the actual ecological and economic impacts these light traps could play in ecological and social sustainability.

As I went to set up my own light traps throughout our fieldwork sites in Svay Cheat village, I realised that no farms throughout the village had any light traps up. So I asked the farmers why. The farmers said they’d been told by a local agricultural department to take down the light traps and not put them back up. Why you might ask? Apparently, they said that the traps actually attract more pests into the area thus causing more damage to the rice, so it is not a good pest control method to use.

At first, my supervisors and I were confused and did not really agree with this as it seemed unlikely that insect traps would attract many more insects than were already there, and enough to cause more damage. Either way, the farmers took and kept them down. This just ignited my interest on the role these traps play. Particularly if they are causing a detrimental effect or if they really can play an important role in agro-ecological systems and humans can be used as biological control agents.

I am still undertaking my experiments with these traps and my other PhD field work in Cambodia so I will update my results as I get them, however I am excited for the outcome.

This has the potential to be a gateway into promoting sustainable pest management with the added extras of health and environmental benefits.

I’d like to thank the ACIAR project (CSE-2015-044) I’m working with and everyone involved, and the Crawford Fund for assisting me in my travel and fieldwork.

Lucinda Dunn (otherwise known as Indi) is a PhD student at the University of Sydney (USYD). She is conducting her research in Cambodia ecological and social development of rice agroecosystems to form sustainable pest management methodologies for smallholder rice farmers. Indi’s project is in collaboration with the ACIAR project (CSE/2015/044) “Sustainable intensification and diversification in the lowland rice system in Northwest Cambodia”. Support for Indi’s research comes from an Australian Government Research Training Program Scholarship, the Crawford Fund and the University of Sydney.