You are here: RAID > Blogs > Moments working in Myanmar

Six months ago I arrived in Myanmar ready for the adventure of getting a livestock research project started, not knowing what to expect really but being prepared with a large wad of US dollars. (I’m not a drug dealer it is just very difficult to get money into Myanmar).

In the past six months there have been moments…. moments that I have felt more than I have ever felt before. Moments that have made me want to tear my hair out and in the same day moments of elation as step by step the project has started to take shape.

There have been moments of misunderstanding…. when a cattle crush was built large enough to house an elephant. And not only that, but there were two “elephant” crushes built side by side rather than at either end of the village.

There have been moments of surprise when after initial reluctance of farmers to use ear tags we were offering for their cattle, sheep and goats they became quite a fashionable item. Of course the ear tags were also useful for farmers to identify their animals and for us to be able to do the same.

There have been moments of pride seeing two young researchers from Myanmar go from not knowing how to use excel to competently entering production data for cattle, sheep and goats after only a short amount of training and practice.

There have been moments of hard work with shared enthusiasm… getting up early to work with farmers and researchers to plant forage trials. We would have been there the whole day planting seed except that there were so many farmers interested in what was happening and willing to help.

There have been moments of satisfaction going from the chief field trip planner to one of my Myanmar colleagues emailing me the itinerary for the next field trip and telling me they will be able to organise everything and will call me if there are any problems.

There have been moments of drinking tea…more than one. Watching the tea making is half the fun. It is far more than boiling the kettle, but is made by tea baristas. It looks a lot like a barista in one of the trendiest cafes in Melbourne making coffee, only with condensed milk and large pots simmering with Myanmar tea.

There has been well meaning respect that has turned into rather funny moments… being greeted at any time of the day by the grounds keeper with a very polite “Good morning Sir!” and a salute.

Some of the moments so far have been amazing, some just hard. Regardless they feel worthwhile, and that has been the strongest feeling by far, that I am making a contribution to something that empowers researchers and farmers in Myanmar. 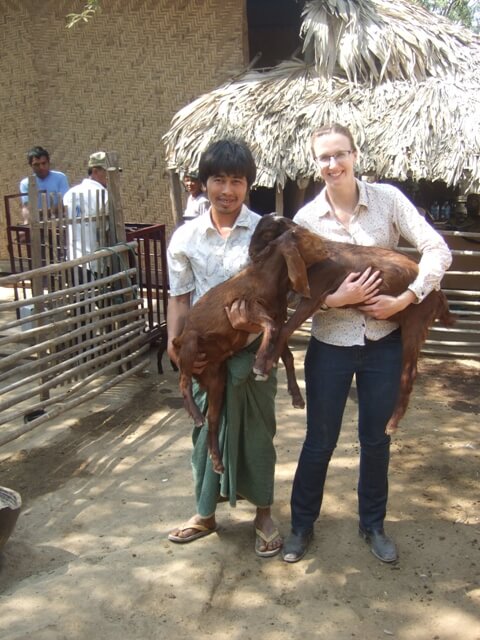 Working with farmers to weigh goats