You are here: RAID > Blogs > Connecting with Timorese youth through fisheries research

Think of sardines and most people think of those that come tightly packed in a tin.

But here in Timor-Leste, sardines come piled in the front of wooden canoes, their iridescent colours still bright. They come in black buckets balanced on bicycles, in bunches hanging from trees, in wreaths looped over motorbikes and in meticulously arranged rows on the side of the street.

These are the small, nutritious and surprisingly pretty fish that have brought me to live in Timor-Leste to do research for my PhD. 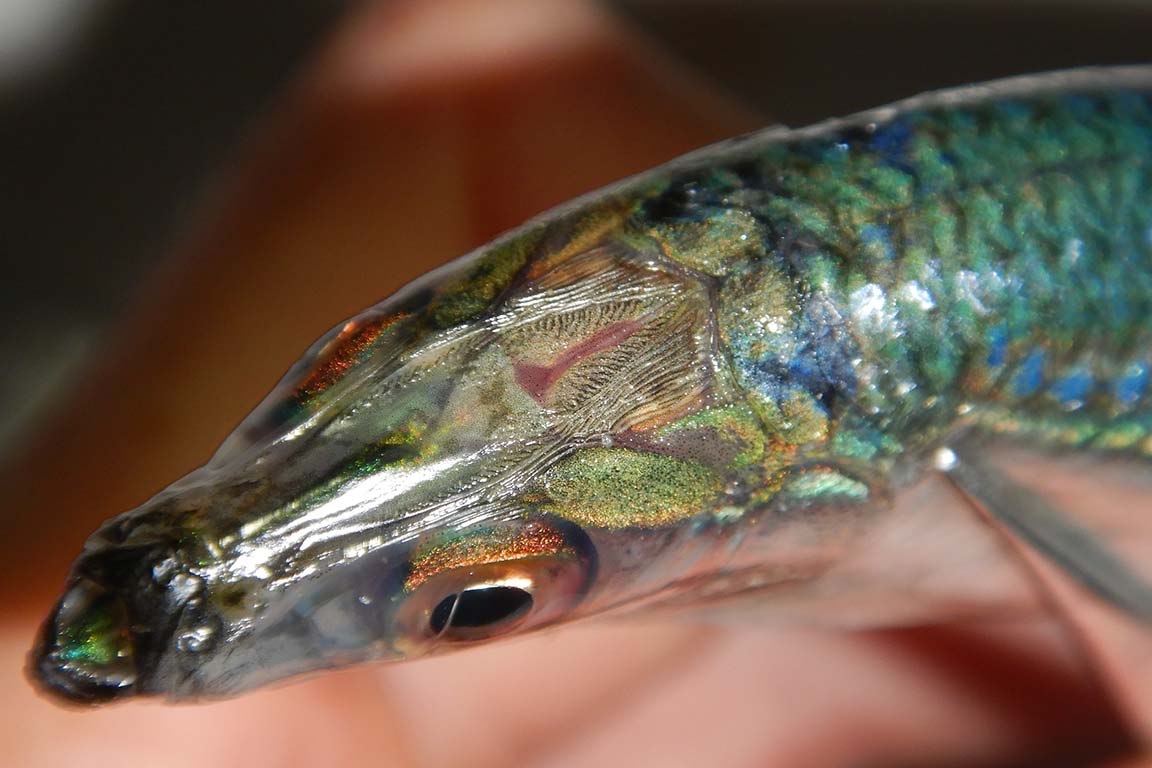 The iridescent colours of a sardine (Sardinella sp.) caught in Timor-Leste – this one was prepared for transport to the Museum and Art Gallery of the Northern Territory, who are helping to verify its species identity.

Timor-Leste: just an hour flight north of Darwin, but a different world. Stepping off the plane in Dili you’re met with motorbikes on hot dusty roads, dry hills and a winding coastline. Palm trees, playing kids and brightly painted canoes scatter the beach.

This half-island nation is a youthful one: both in years since gaining Independence in 2002, but also in terms of its people – 74% are under the age of 351. Poverty, malnutrition, food insecurity, poor infrastructure and high youth unemployment are just some of the challenges gradually being addressed. And with 60% of people earning a living as farmers and/or fishers2, developing and enhancing the agricultural and fisheries sectors are vital. 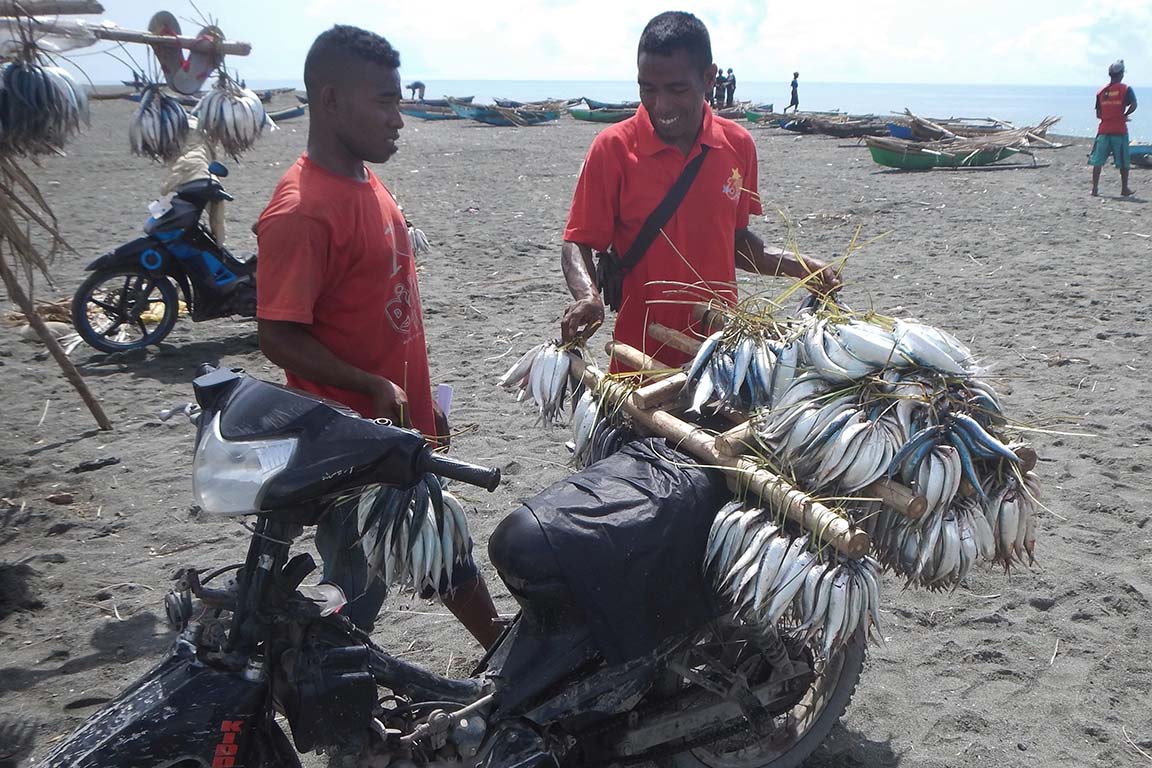 Fisheries in Timor-Leste are very small-scale: fish like sardines are caught from small wooden boats, then sold at the beach to waiting fish traders who take the fish to market.

My research investigates Timor-Leste’s sardine fisheries and the business of getting sardines from the ocean to the dinner plate – where and how this happens, the people involved, the importance of these activities for income and food, the challenges and opportunities.

However, doing this in a country and culture that are not my own, using languages that I’m still learning, and in several places at once, would be impossible without the team of amazing young Timorese men and women who I’ve had the fortune and privilege to engage in my research activities.

Over the past 18 months, around 40 local youth have worked with me in various roles – as data collectors, interviewers, general assistants and translators. For most, it has been their first experience of doing research. Many have graduated from university or high school but can’t find work; a few are still studying and help me during their holidays. Some have young children already; most still live at home and help their families with village life – collecting firewood, tending animals and gardens. All have been enthusiastic at the opportunity to learn new skills. 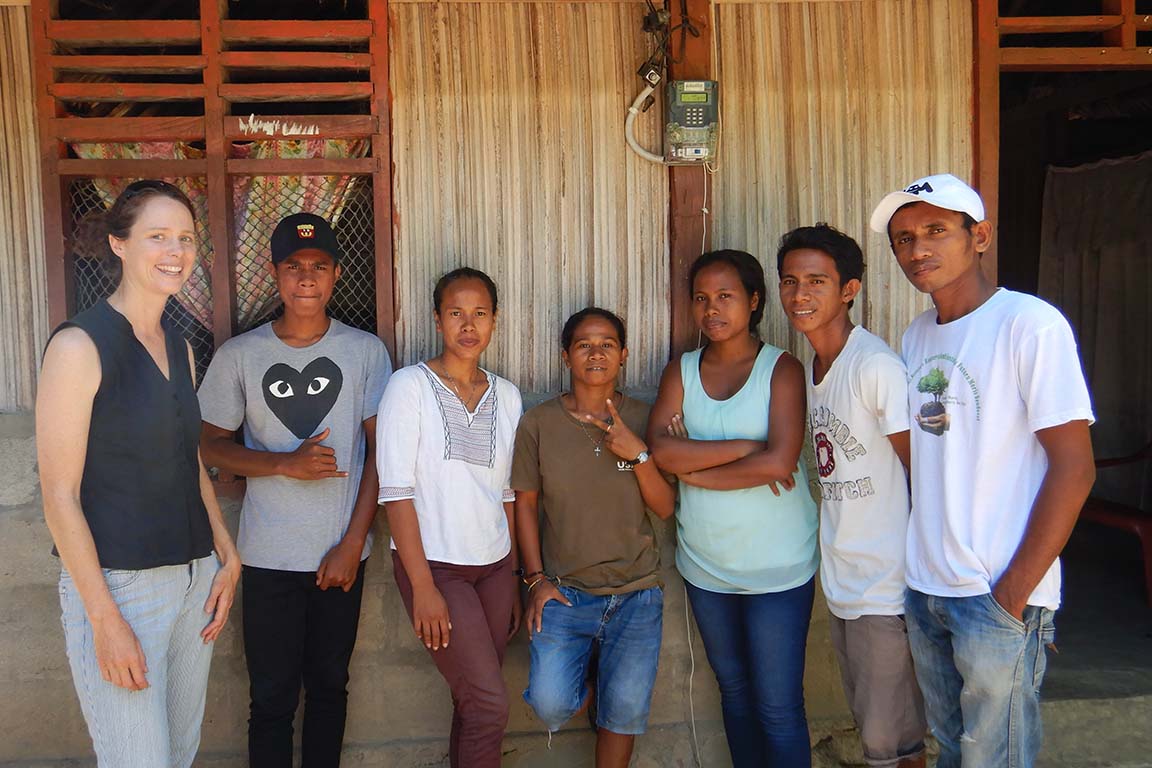 Together with the interview team for household surveys in Bobonaro Municipality.

“This is my first time holding a tablet!” – The six faces in front of me were peering at the tablets I’d just handed out, looking slightly worried. It was our first day of training and we planned to survey 140 households in their two coastal villages using an electronic form. After we’d gone through the basics and spent a long time discussing the in-built skip-logic – that the survey questions would change depending on people’s previous answers – they had a practice and quickly got the hang of it. By the end of the week, not only had we successfully surveyed the full target number of households, but they wanted to know more – about downloading the data and making their own online surveys.

But the learning and knowledge sharing have gone both ways.

“It’s like this, sister…” – One of my data collectors in Dili, also a part-time fisher, was telling me how they sewed the sections of fishing net together and tied on the floats and sinkers. This was just one of many conversations where he and others have patiently explained how something works or why it happens that way – enabling me to gain a much better understanding of the detail. They’ve also made some great suggestions based on their local knowledge and experience. Through input from the team, I refined survey questions to ensure they made sense in the local context, which improved the quality of data collected. 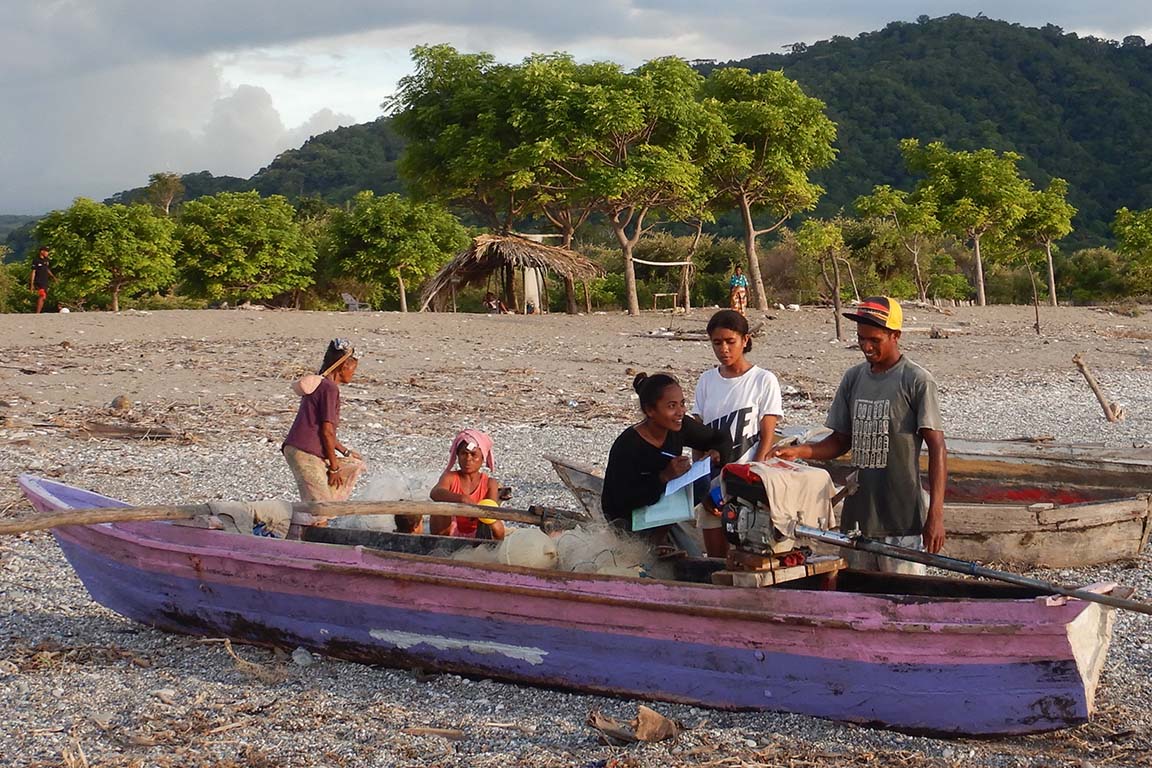 Asking a fisher about his day’s catch as he packs up his gear in Bobonaro Municipality.

Of course there have been challenges – lots of time spent training, some misunderstandings, mistakes, lessons on the importance of clear communication, language and cultural barriers. But both my research findings and my personal enjoyment have been enriched through the involvement of these young Timorese. And there have been shared benefits – for them, the opportunity to do research in their own communities, earn a bit of money and build skills, knowledge and confidence.

Next month I’m looking forward to hosting a small party at the beach to celebrate the research we’ve done together, with music (and dancing, I’m told), katupa rice parcels, and – if we’re lucky – some barbequed sardines.

Kim Hunnam is a PhD student from Charles Darwin University (CDU) and the Australian National University (ANU). She is conducting her research in Timor-Leste in collaboration with WorldFish, an international, non-profit research organisation, who works in partnership with the Timor-Leste Government Ministry of Agriculture and Fisheries. Her research is supported by an Australian Government Research Training Program Scholarship, as well as funding from the North Australia Marine Research Alliance, CDU and the ANU.

1 Timor-Leste National Human Development Report 2018; 2 Based on ‘Occupation’ recorded in the Timor-Leste 2015 Census.